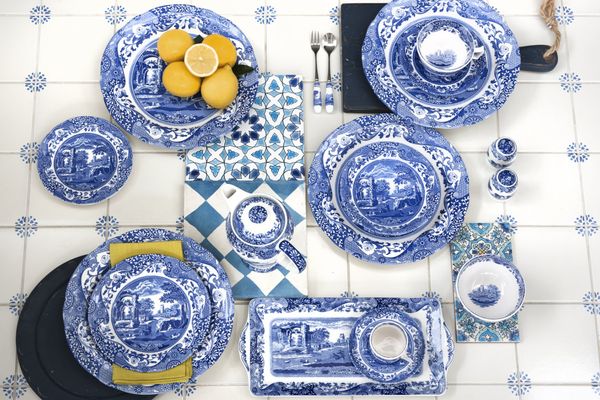 Spode China has created some of the most popular tableware products and patterns the industry has ever seen.

Famous for bone china and underglaze blue transfer printing, we have over 350 discontinued Spode tableware patterns, many of which would have been produced in the company’s heyday between the 1960s and 1990s.

A Brief History of Spode China

Josiah Spode I was born in Staffordshire in 1733 into a family of talented potters. In those days there was no such thing as large potteries. Instead, potters worked in their homes in the area known as the ‘Pottery District’.

Josiah, aged 16, followed in the family trade and started an apprenticeship under the great Thomas Whieldon. Inspired by Whieldon’s constant experimentation and drive to improve his skills; Josiah moved on to head up the Works of Turner & Bank in the 1760s, which was by then a thriving business in a booming industry.

Acquiring property in the Church Street area, allowed Josiah to take title to the entire Works, which continued production in the same place until 2008.

Josiah Spode I and some of his contemporaries were responsible for creating technological advances in ceramics which appealed to a broader customer base. One such example is Spode’s process of underglaze printing and the introduction of underglaze blue, which at the time was a truly revolutionary advance.

Spode opened up a London showroom and decided to put successful London banker and tea merchant William Copeland at the helm. This gamble paid off in a big way, which prompted Josiah I to send his son, Josiah Spode II, to London to learn the sales side of the business.

Spode’s partnership with Copeland brought another fortunate coincidence. Through his contacts in the Oriental tea trade, Copeland was able to provide Spode with innumerable Chinese designs, which were transformed using Josiah’s unique style and influences.

The most significant achievement that Spode China boasts is the perfection of Fine Bone China. While his peers had only dabbled with experimentation along these lines, Josiah Spode worked tirelessly to perfect a formula that is still used today. The very first piece of Spode Bone China was drawn from the oven in 1794 rivaling the quality of that which was brought back from the Orient.

Once the business was handed over to Josiah Spode II, he and Copeland took the company across international waters, and Spode china and Spode pottery were shipped to every corner of the civilised world.

After Josiah Spode II death, the reigns of the business were transferred to the Copeland family where the company remained until 1966, during which time the firm merged with Royal Worcester.  The Copeland Spode name was used up until 1970 when the company reverted to Spode Ltd.

In the 1980s and 1990s, the landscape of the ceramics industry had shifted immensely; many skilled processes and traditional techniques were replaced with computerised design, advanced lithographic printing and machine automation.

Spode china – still made using traditional handmade techniques where possible up until 2007 – had been outsourced to the far east by this point.

However, in 2009, the Spode brand was acquired by the Portmeirion Group, whose factory is just a stone’s throw away from the original works in Stoke.

Many current ranges are again being produced in Stoke. Classic designs including Blue Italian, Blue Room and Christmas Tree are still available, and new designs such as Delamare and Ruskin draw influence from the Spode heritage.

Chinese Rose - Mint and White inside