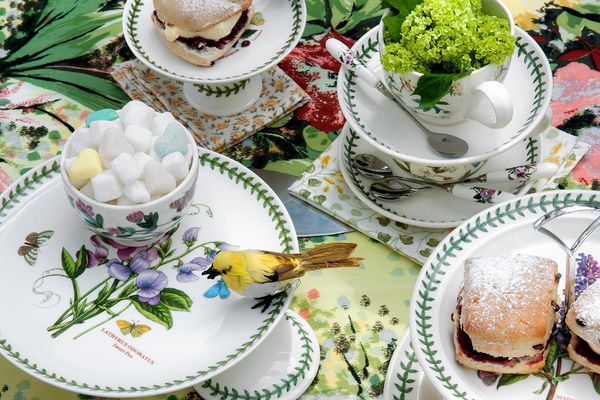 Susan Williams-Ellis had been working in collaboration with A.E. Gray for many years, commissioning giftware designs to be sold around Portmeirion Village, with the backstamp ‘Gray’s Pottery Portmeirionware’.

Due to their initial successes, the couple purchased a new pottery company, Kirkhams Ltd, in 1961. This latest acquisition could manufacture pottery as well as decorate it, so these two companies were merged to create Portmeirion Potteries Ltd.

The initial Portmeirion designs included Malachite, Moss Agate and Talisman. In addition to this, in 1963, the famous design Totem, which formed abstract patterns based on primitive forms in a cylindrical shape, was released to huge acclaim.

Magic City and Magic Garden followed in 1966 and 1970 respectively, but Portmeirion’s most recognisable design is arguably the Botanic Garden range, which took floral inspirations from Thomas Green’s dictionary Universal or Botanical, Medical and Agricultural.

Although the range was launched in 1972, new designs have been added over the years and continue to be to this day. Most recently Botanic Garden Harmony which draws inspiration on the retro shapes from the 1960

During the 2010s Portmeirion have significantly grown following the acquisition of Royal Worcester and Spode in 2009.  UK production of tableware has been increasing and the new tableware designs reflect the heritage of the brand.

Since these acquisitions, Portmeirion Potteries has since been renamed as the Portmeirion Group and have continued to build successful collaborations with Sophie Conran and also Sara Miller.

Browse our many Portmeirion replacement china patterns - buy online or by phone or register for a free no obligation search.

Flowers of the Year

The Holly and The Ivy