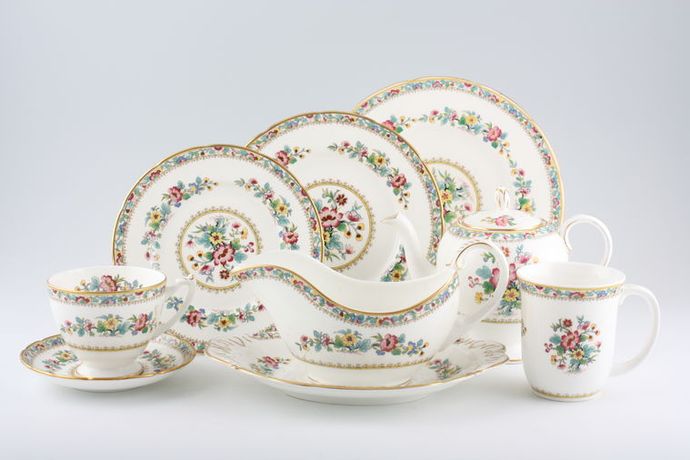 In 1967 the Coalport pottery range was acquired by the Wedgwood group, but continued under the brand, although tableware production was slowly phased out and the most important patterns were moved under the Wedgwood brand.

World famous as a manufacturer of distinctive bone china tableware and decorative items the English firm of Coalport china can trace its origins back to the mid-18th century when Squire Brown of Caughley Hall began producing ‘Salopian’ earthenware pottery at the works standing on the high ground above the River Severn.

In 1799 Thomas Turner the proprietor of Caughley and the man who introduced the renowned ‘Blue Willow’ tableware pattern into England - sold his pottery to John and Richard Rose who had established a porcelain factory at nearby Coalport about three years previously.

From the early 1830s, Coalport became more varied in form and lavishly ornamented. Flower characteristic features and rococo shapes were featured on designs until the late 1840s. The flower encrusted wares are often referred to as Coalbrookdale and may be marked in blue. In 1851, Coalport became the first English pottery to reporduce the ever so famous "Rose Pompadour", which was awarded a gold medal at the Great Exhibition.

Queen Victoria commissioned Coalport in 1845 to make a richly decorated dessert service which she presented to Czar Nicholas I of Russia, after displaying it at The Great Exhibition in 1851 where it caused a great sensation. One of the plates from this service fetched £750 are auction in London in 1975.

In 1926 the Coalport firm moved from Shropshire to Stoke-on-Trent and forty-one years later became a member of the Wedgwood group and popular tableware patterns such as Countryware started to be produced under the Wedgwood brand. Demand for Coalport fine bone china increased with almost half its production is it exported around the world. At its peak Coalport employed skilled crafts people in three spacious factories, located in Fenton and Stoke, two of the Six Towns of Stoke on Trent in Staffordshire. These highly trained men and women included china flower makers and a team of freehand ceramic artists.

Waltz of the Flowers