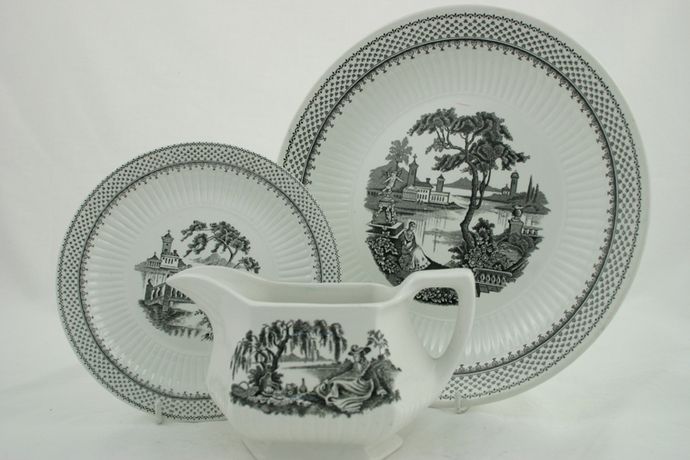 The Minuet designs were originally used in the nineteenth century by J.Meir & Son under the title ‘Laconia.’ And were taken from a series of prints (about 15) showing classical buildings with a lake setting with some of them featuring one or two female figures in the foreground. Frank Rides of Wolstanton, an art master, prepared the graphics. His fee was a ‘Minuet’ dinner service while Claude Wittingham of Latchfords of Cliff Bank was the engraver.

Minuet was colour printed, the design started on the Empress shape but later, c. 1969 after Wedgwood purchased Adams & Sons the design was made on the Gadroon shape. A number of Minuet patterns were produced including a version of Black Minuet when enamelled called ‘Claudette,’ and by 1974 only black was available.

For help and advice on replacing or collecting Adams Minuet call us on 01926 512402, or for general information on buying discontinued china, read our Essential Guide.

If we don't have the item you require in stock, register for a free no obligation search and we'll find it for you.

Dinner Plate
10"
Search For Me

Rimmed Bowl
9"
Search For Me

Soup Cup
2 handles
Search For Me

Sauce Boat
Search For Me

Sauce Boat Stand
Search For Me

Vegetable Dish (Open)
Search For Me